Just 30,000 letters of the alphabet of life are enough to create the entire SARS-CoV-2 virus, provided those letters find the machinery present in all of our cells to do the hard work. Those letters get copied, and copied, and copied with each new infection, in each new cell, and errors compound. The vast majority of those errors make SARS-CoV-2 a less effective virus. But some have the opposite effect, honing the virus to accomplish the only thing that RNA really wants to do – make more copies of itself. This is evolution. And this is how variants are born.

A new variant takes center stage this week – notable primarily for the dramatic international response to its emergence. Countries around the world are slamming their borders shut.  What makes Omicron so special?

There have been a flurry of stories and rather breathless news reporting on the new variant, and I appreciate that the situation is evolving rapidly, but for now I wanted to take an opportunity to try to put all the hard facts in one place.

First – a bit of timeline. 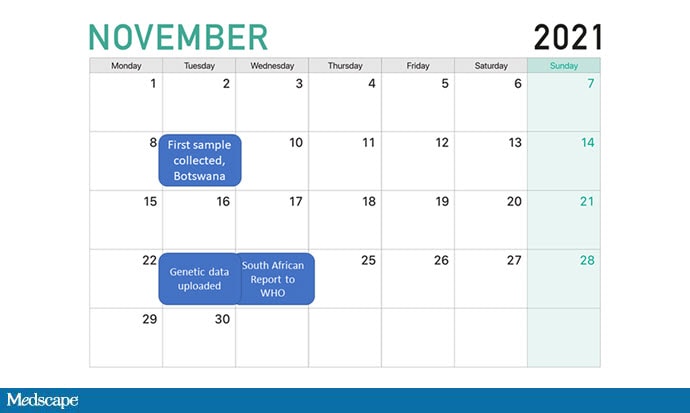 The earliest Omicron sample, that we know of so far, was collected on November 9th in Botswana. It was sequenced by South African researchers and uploaded to a central site on November 23rd. On November 24th, South Africa made its report to the WHO. We’re still in early days.

But not that early. As of the time I’m recording this, Omicron cases have been identified in more than a dozen countries including Germany, the UK, China, Australia and Canada. By the time you watch this, it will certainly have been identified in more. The United States instituted a travel ban on South Africa and seven other countries Monday. But I’d honestly be very surprised if it isn’t here already.

Omicron is scary because of the number of mutations in the sequence for the spike protein – which is the major target of our vaccines as well as the key to allowing SARS-CoV-2 to dock to our cells. This list, courtesy of Jeffrey Barrett highlights those mutations and shows a number that have been in prior variants, and a number that are brand new. 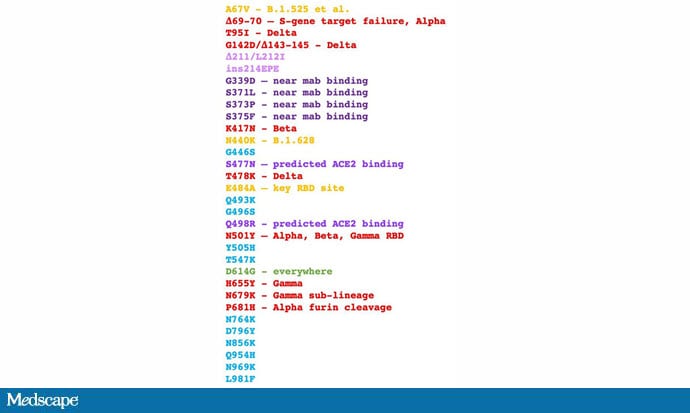 But, as I’ve discussed before, there are really only three things that practically matter when you are evaluating a new viral variant.  One – how transmissible is it?  Two – how pathogenic is it? And three – does prior immunity (either from vaccines or survivor immunity) continue to provide protection?  Without further ado, here is the best data I could find so far.

How transmissible is Omicron?  The concern that this is a highly transmissible variant is the underlying reason for the robust international reaction. But – is it more transmissible than, say, Delta?  Most of the concern centers around this graph, showing the rapid – some would say explosive – displacement of Delta by Omicron in South Africa – it’s that blue spike at the end there. 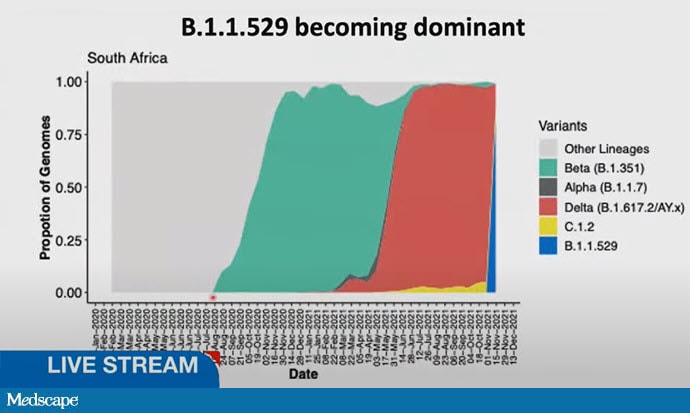 But be careful here – the Y-axis is proportion of cases, and South African cases were fairly low recently, as you can see here. That means even a few super-spreader events could throw off the curve.

Still – you can see an uptick in total cases recently in South Africa. 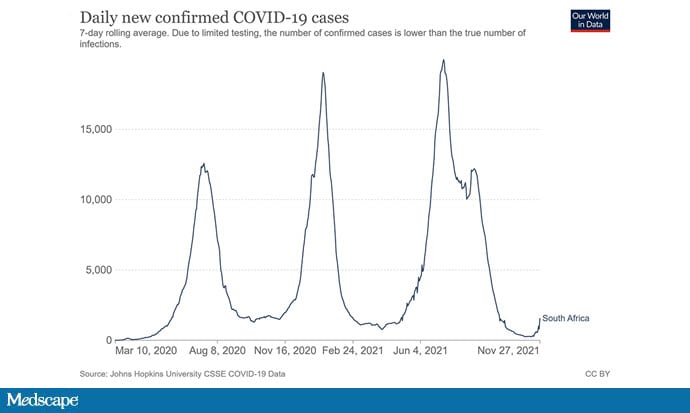 and the test positive rates from Gauteng province have skyrocketed from around 1% to 30% over the past week. That certainly gives me pause. 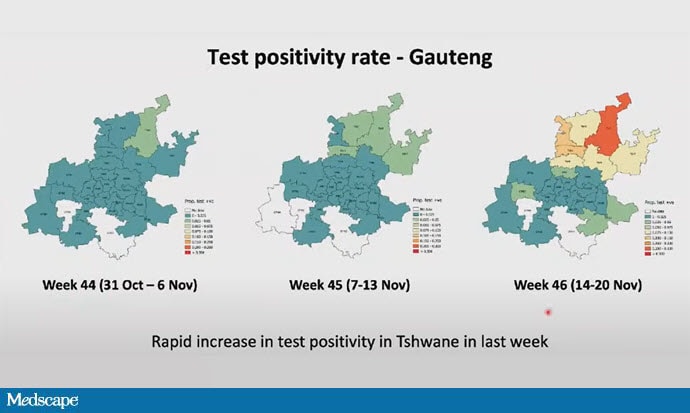 A few other data points on infectivity – a report from Hong Kong details the case of a traveler from South Africa who tested negative before his flight on November 11th – he tested positive while quarantining in a Hong Kong hotel on November 13th. Concerningly, an individual across the hallway also tested positive for the new variant as well. PCR cycle thresholds for both individuals were fairly low, suggesting they were putting out a lot of virus particles.

And a report from the Netherlands examining 539 travelers from South Africa on Friday has identified 61 COVID cases- not clear what variant yet but that is clearly a high rate of transmission.

For now, it remains unclear just how infectious Omicron is – statements saying it may be 5 times as infective as Delta, for example, are premature, but the concern of higher infectivity is very real. 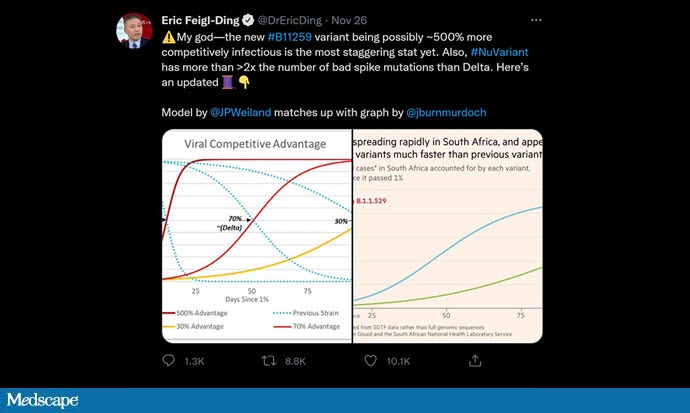 What about pathogenicity? How sick can Omicron make people?

We don’t really know yet. However, one Israeli expert reports that, among vaccinated people, there were no serious cases. Still, there are simply too few known cases to have a sense of the case fatality rate.

But I do want to point one thing out. There is a lot of armchair evolutionary biology going around that says that viruses mutate to become less lethal over time. This is not correct. Viruses mutate to increase the amount of their genetic code in circulation. While decreased virulence can do that – by keeping hosts alive longer to spread more virus – SARS-CoV-2 isn’t that virulent – this isn’t Ebola – most people survive a SARS-CoV-2 infection. The best way for SARS-CoV-2 to optimize itself evolutionarily is to mutate to increase viral loads and bind to host cell receptors more strongly. An increase in virulence in order to achieve a higher viral load may well be worth the evolutionary tradeoff.

OK – what about immune escape?  Mild cases among vaccinated people suggests at least some retention of vaccine efficacy – that’s good news.  Of course, the sheer number of mutations in the spike protein of this variant – our vaccine target could be a problem. The genetic distance from other lineages, as you can see here, is potentially concerning – Delta lineages are shown in green – Omicron is red, closer to Alpha than Delta frankly. But immunity is a complicated thing. 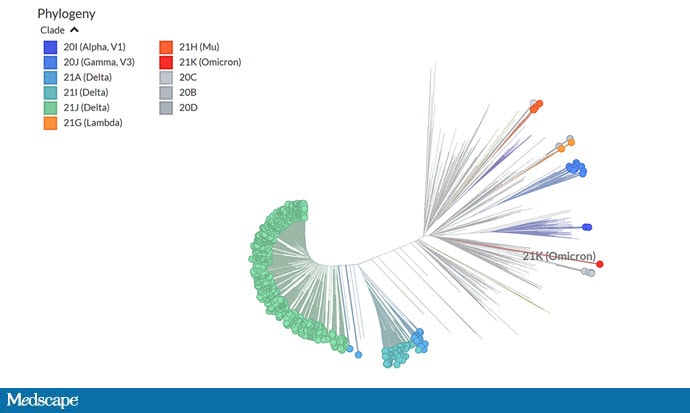 The number of spike protein mutations in Omicron is definitely noteworthy – this is quite a bit more than seen with the other major variants of concern. 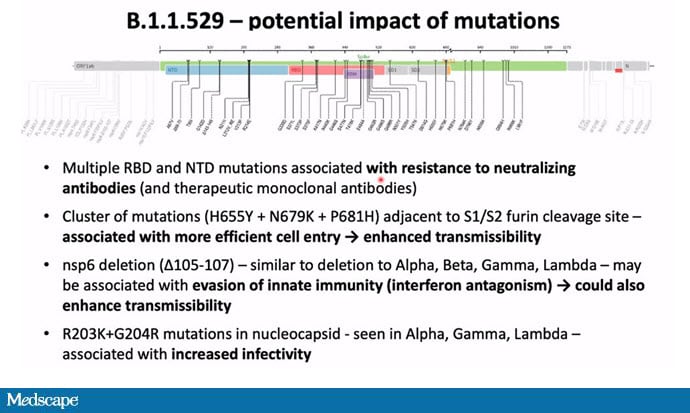 These mutations have been associated, in other strains, with resistance to monoclonal antibodies and enhanced transmissibility.

We’ll get our first information from in vitro virus neutralization assays within a week or so. These will use stored samples of vaccinated sera to see how they protect against the new virus in cell culture. One important note – South Africa only has around 25% of their population vaccinated, so the spike in cases there does not necessarily mean vaccines are not protective against Omicron infection.

Should the vaccines be updated?  Some scientists have argued that a vaccine update should target Delta – since it is so dominant worldwide, the thought was that all subsequent variants would come from Delta anyway.

Well, best laid plans. Omicron shows us that we might not be able to predict where the next important variant will arise.

But one thing is becoming clear – as long as there are cases of COVID-19, there will be variants. Evolution will occur. Will a variant evade vaccines while retaining infectivity? Not necessarily – there may not be an evolutionary niche there. But unless we do a much better job vaccinating the world to suppress those cases, we’ll find out.

F. Perry Wilson, MD, MSCE, is an associate professor of medicine and director of Yale’s Clinical and Translational Research Accelerator. His science communication work can be found in the Huffington Post, on NPR, and here on Medscape. He tweets @fperrywilson and hosts a repository of his communication work at www.methodsman.com.

Reducing Barriers Can Increase Treatment and Save Lives Overview Over...

Swine influenza is a respiratory disease of pigs caused by type...