As the COVID-19 vaccine heads toward approval for children under age 12 years, the number of older children receiving it dropped for the 10th consecutive week, based on data from the Centers for Disease Control and Prevention. 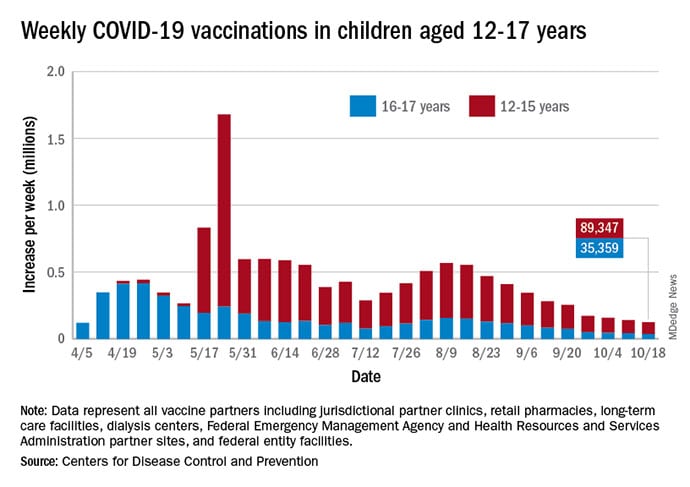 Over 47% of all children aged 12-17 years — that’s close to 12 million eligible individuals — have not received even one dose of COVID-19 vaccine, and less than 44% (about 11.1 million) were fully vaccinated as of October 18, the CDC reported on its COVID Data Tracker.

During the week ending October 18, almost 125,000 children aged 12-17 years received a dose of vaccine — that’s about 20% of the highest number seen when vaccinations spiked in August and just 7.4% of the peak recorded during May 18-24 (nearly 1.7 million doses), when eligibility expanded to include 12- to 15-year-olds, according to the CDC data, which also show that weekly vaccinations have never been lower.

Fortunately, the decline in new cases also continued, as the national total fell for a 6th straight week. There were more than 130,000 child cases reported during the week of October 8-14, compared with 148,000 the previous week and the high of almost 252,000 in late August/early September, the American Academy of Pediatrics and the Children’s Hospital Association said in their weekly COVID-19 report.

That brings the cumulative count to 6.18 million, with children accounting for 16.4% of all cases reported since the start of the pandemic. For the week of October 8-14, children represented 25.5% of all COVID-19 cases in the 46 states with up-to-date online dashboards, the AAP and CHA said, noting that New York has never reported age ranges for cases and that Alabama, Nebraska, and Texas stopped reporting over the summer.