Sometimes I feel growing despair, feeling helpless that I can’t try to impact each of these individually, let alone all happening simultaneously.

This week feels worse, as COVID-19 cases rise due to the Delta variant, and the response of many politicians is incomprehensible to me.

For example, we have Sen. Mitch McConnell, who has said that his goal is to obstruct everything that President Joe Biden supports. Presumably, he wants Mr Biden to be viewed as a failure and is determined that he be a one-term president. While that level of obstructionism hurts his constituents, I can sort of understand the approach.

But killing your base to own the liberals?

He, at least, has been more rational about vaccines, encouraging people to get vaccinated. But until now, right-wing icons like Sean Hannity have insisted that COVID is a hoax and sabotaged the administration’s efforts to control it.

The levels of misinformation and efforts to discourage vaccination and safer behaviors are mind-boggling.

A sampling from the week:

A fifth of surveyed adults believe that the COVID vaccine is being used to microchip people. Really? The results fell, unsurprisingly, along party lines. Why would the government bother when they can (and do) track people via their cell phones?

Charles Gaba illustrates the disparities along party lines. He also notes that, at the county level, cases per capita are 50% higher in the red counties than the blue ones. 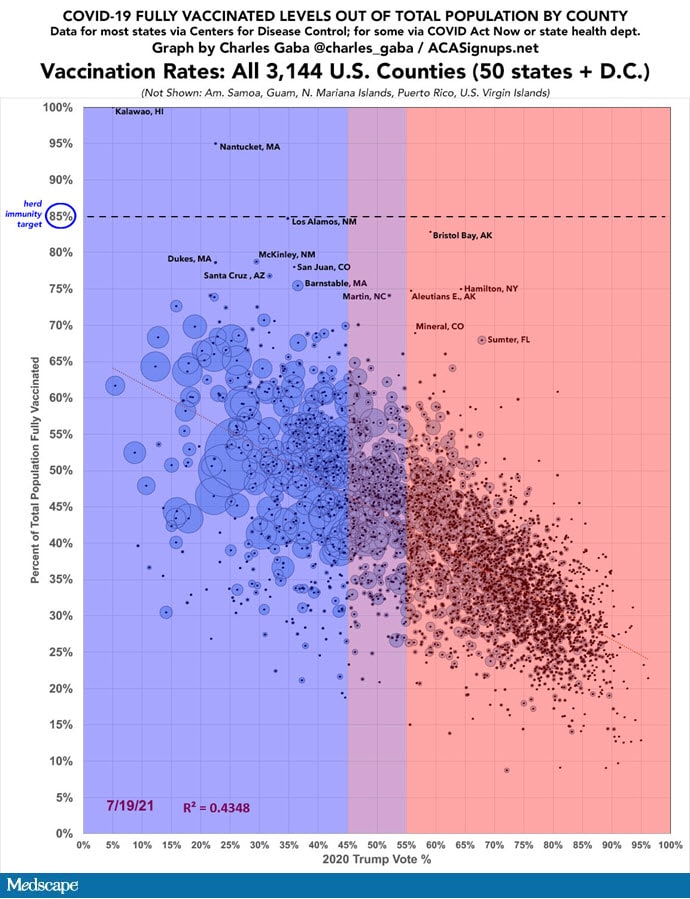 The Arkansas state legislature made it “illegal for any state or local entity, including public hospitals, to require coronavirus vaccination as a condition of education or employment until two years after the Food and Drug Administration fully licenses a shot.”

A new Ohio law prohibits the state’s schools from enforcing CDC guidelines. The schools can’t require unvaccinated people to “engage in … precautions that differ from the precautions of an individual who has received such a vaccine.” It may also block quarantine requirements.

Per CNN, 13 states have passed bills that prohibit requiring proof of vaccination, according to the National Conference of State Legislatures. They are Alabama, Arkansas, Florida, Indiana, Iowa, Kansas, Missouri, Montana, North Dakota, Oklahoma, Tennessee, Texas, and Utah. Similar bills are pending in 21 other states.

For me, the most shocking and ignorant move has come out of Tennessee. Brett Kelman reported that politicians pressured the state’s health department to stop all vaccine outreach to teens — not just COVID vax. I can picture the clusters of meningococcal meningitis, measles, HPV, and cervical cancer that will follow. Even adult COVID-19 clinics on school property are now banned. With only 38% of Tennesseans fully vaccinated, and given the toll of long COVID (PASC), Tennessee’s politicians are pretty much ensuring that its citizens will lag behind much of the country in terms of productivity and quality of life.

Dr Michelle Fiscus, Tennessee’s medical director for vaccinations, was fired after politicians objected to her teen outreach, including informing medical providers that teens can legally receive vaccines without parental consent. According to Kaiser Health News, “At least 181 state and local public health department leaders have resigned, retired or been fired during the pandemic,” leaving a huge void in leadership. There are also moves in at least 24 states to limit the authority of public health officials — powers that have been essential in controlling a variety of infections, from tuberculosis to typhoid.

I find the self-destructive anti-vax stance incomprehensible. And I feel inadequate when I try to answer the concerns of “vaccine-hesitant” folk. I get some questions, particularly about infertility. I try to explain risks and benefits and that there is zero evidence that the vaccine causes infertility, but rational arguments clearly fall on deaf ears.

The most plausible explanation I’ve seen for the Republican opposition comes from Greg Sargent, who said, “Trump has now recast the question of whether to trust the federal government on vaccines as a proxy for whether the election was stolen from him.” Similarly, Sen. Bill Cassidy “is saying, in effect: Trusting the feds on vaccines is tantamount to endorsing Democrats’ claims that GOP voting restrictions are racist.” In either case, promoting these and other lies hurts our democracy and is killing people.

A few Republicans are starting to come around and support vaccinations, like Steve Scalise. But others, like Rep. Marjorie Taylor Greene, continue to spew lies and compare vaccination efforts to Nazi tactics — ignorant, inexcusably offensive, and hate-mongering views.

All we can do is keep trudging now, but it is more challenging with attacks on so many fronts. For now, countering voter suppression appears key to progress on other fronts, as the same politicians who are trying the hardest to suppress voting are often the same politicians who are prominently pushing anti-vaccine lies and anti-masking. Some of these same politicians appear to have figured out that their positions on vaccines and masking are going to maim or kill their voters, so there’s some hope. It will be slow and arduous, but hopefully, reason will prevail.

What do you think might work? Let me know in the comments.

Judy Stone, MD, is an infectious disease specialist and author of Resilience: One Family’s Story of Hope and Triumph over Evil and Conducting Clinical Research: A Practical Guide.

She survived 25 years in solo practice in rural Cumberland, Maryland, and now works part-time. She especially loves writing about ethical issues and advocating for social justice. Follow her at drjudystone.com or on Twitter @drjudystone.

If you have heart disease, or have survived a heart...

Despite significant progress over the last few decades, meningitis remains...

Worldwide childhood vaccinations continued to decline in 2021, fueled by...