Last week we interviewed Dr. Winston Timp about advances that have enabled the acquisition of robust viral sequencing data during the COVID-19 pandemic. That conversation showcased the role of less visible data streams as the United States combats the anticipated development and viral variants including the Delta variant and other COVID-19 mutations. Variance and mutation are expected in the evolution of fast growing pandemics, and it’s important to remember that the primary COVID-19 vaccines remain effective against Delta and all known variants1. Getting vaccinated is still the best way to protect yourself, your family, and your community.

The first major news coverage of the, now dominant, Delta variant surrounded the humanitarian crisis it sparked in India in spring 20212. At that time, India was experiencing low levels of vaccination3 due to a lack of vaccine access, with most Covid vaccines produced in India exported internationally, and a fragmented deployment strategy hindered by lack of federal centralization2. This created an environment for Delta to thrive given its increased transmissibility compared to the original (wildtype) SARS-CoV-2 virus. In early March, Delta accounted for only 4% of all sequenced SARS-CoV-2 samples for India4. Just two months later, at the height of that nation’s crisis, over 70% of sequenced samples were of the Delta variant (see image below). The death toll in India has passed 400,0005. Due in part to new efforts from the federal government, vaccination rates are now steadily increasing and cases are decreasing. The true impact of Delta in India is not fully captured by the data provided during the height of the crisis as health care systems were overwhelmed, resulting in significant underreporting2. 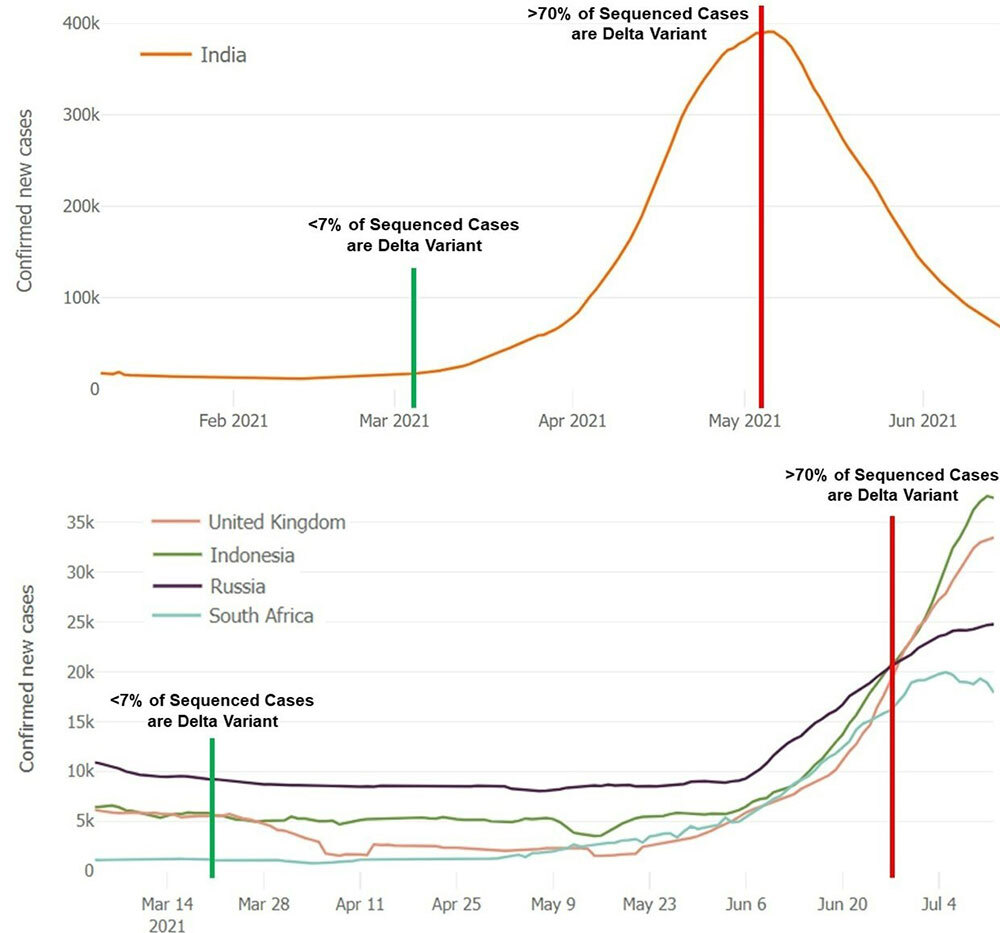 This phenomena is not necessarily exclusive to Delta, as the pandemic evolved variants that spread anticipated and could potentially happen again with a new variant, or in other countries that have yet to experience a Delta surge, making robust data collection ever more critical. Countries with lower vaccination rates are vulnerable to higher spikes of the Delta variant as restrictions start to lift across the world despite WHO warnings6.

Delta Variant in the United States 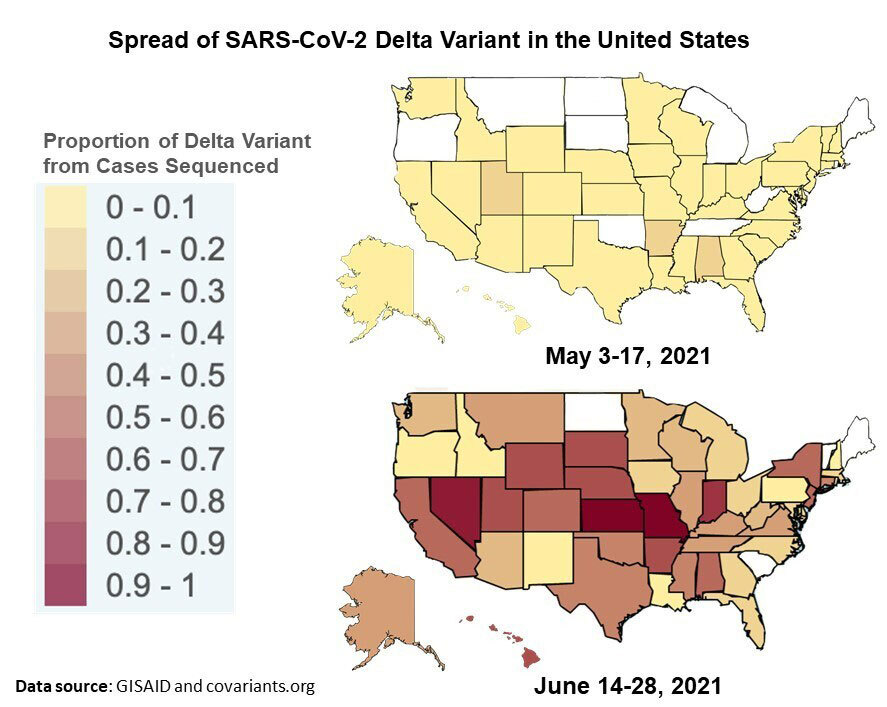 The image above displays the rapid spread of the Delta variant across the United States from May to June 2021. Today, 82% of COVID-19 cases sampled in the United States are Delta as opposed to 2% two months ago, with a higher than average proportion states with more Delta variant — such as Kansas, Missouri, and Nevada (dark red above) — experiencing an increase in COVID-19 cases4.

The rise of a new dominant variant in the United States is not alone a cause for concern; if 82% of cases are Delta, but there are only 100 cases nationwide, then there is nothing to worry about. However, as shown below, the rise of Delta in the United States correlates with a rise in COVID-19 cases. The 7-day rolling average for new cases is now more than double what it was just a few weeks ago. Vaccinations made it possible to keep case numbers lower than previous spikes, but the trend is moving in the wrong direction with more cases every week instead of fewer. Changes to data trends should be watched closely and we should be prepared to respond to changing conditions in communities.

Delta, along with new, higher transmissibility variants, could be allowed to fester throughout the country if we are not regularly testing, reporting from every county, and updating data daily.

Testing remains one of the most useful tools for tracking and combatting COVID-19 variants. Sequencing data is directly acquired from a subset of testing samples; therefore, the accuracy and broad impact of sequencing data relies completely on our ability to test. If a majority of COVID-19 tests are being done on healthy people in major cities that need a negative test for travel or work, then the testing sample pool — which the sequencing data pulls from — lacks data from lower population density areas of the state and for demographics underrepresented in the groups getting tested.

County-level data are essential. If a new variant or a hotspot of Delta arises in one specific area of a county, we have to be testing there to identify the problem. As shown in the earlier image, Kansas currently has a higher than average proportion of Delta, but it has recently decided to only update reporting on county-level cases three times per week7. If there is limited case data for a county, then a reversal of trends would not be recognized until the variant has spread through the state sufficiently to impact the state averages, which could cost many additional lives.

Lastly, the reporting cadence of states remains critical to combatting COVID-19 and its variants. As of last week, 39 states and territories have ceased updating their dashboards every day of the week, a significant increase from when I argued that states should not reduce their reporting cadences last month. Without timely release of data, shifts in trends are tough to spot until much later than necessary. Some states are directing residents to the CDC for data, but CDC data on COVID-19 variants is updated irregularly, and there is often a lag in their release of case data due to bureaucratic obstacles. States need to seriously reconsider their dashboard efforts as we try to combat the Delta variant together as a nation.

It is clear that the Delta variant is deadly and spreading rapidly. Other countries have already suffered inconceivable losses from Delta transmission through their unvaccinated populations. Delta is already in the United States and spreading by the day. Because a majority of the country remains unvaccinated and susceptible to Delta, we need to capitalize on the resources and lessons we have learned from this pandemic to stop the spread and prepare for any future variant. It is not an impossible task, but it only becomes possible with data.

Researchers have identified groups of people most at risk of...